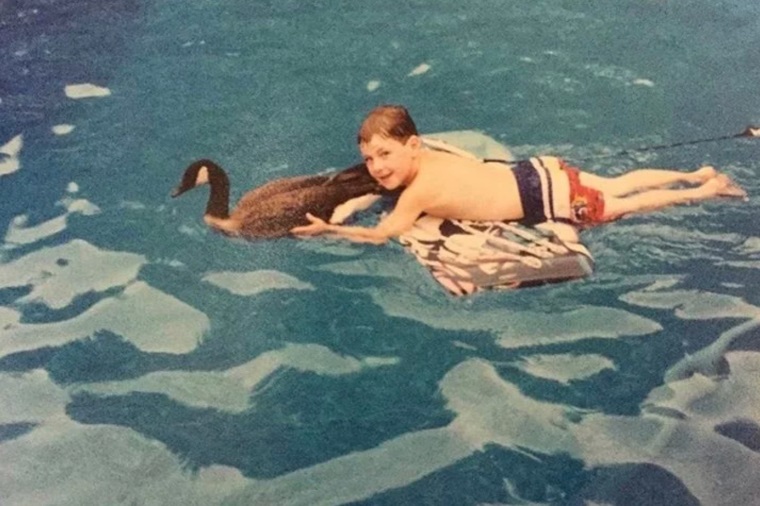 Nature is a beautiful thing. While we can and should enjoy nature we must do it at a distance because every small move we make has an impact on these incredible environments. Recently a story went viral of one family who accidentally interrupted the natural path and ended up with a lifelong friend. Sometimes these accidents work out in a beautiful way.

Steven Lynn lives in Canada and grew up in a pretty normal family. He and his siblings would go on weekend adventures with their family regularly. They could easily be described as the “outdoorsy” type and had been on many hiking and camping trips during his childhood. It is fair to say they had an understanding and great respect for nature. One day as the family was returning home from a football game they approached the driveway and had to slam on the brakes. In the driveway were three geese, two adults, and a baby.

Luckily they saw the geese in time and avoided driving over them but the sudden appearance of the car caused the geese to be frightened and panic. The two adults flew away immediately but the baby goose was too young and wasn’t able to fly yet. The family knew this was a crucial time in the baby goose’s development. Whoever or whatever spent time with the goose now would be seen as its parent. Geese and ducks tend to imprint on their parents. Whoever they meet first when they are born they see as their parents and will follow them relentlessly.

While this goose had been with its goose parents when it was born they had to flee quickly after. The Lynn family were worried about this after seeing how young the baby goose was and decided to stay well away from the baby so that it didn’t fall for them. However as the day went on and the Lynn family continued to stare out the window, the adult geese had not returned. The baby goose was wandering around their driveway looking more than a little lost.

Soon day turned to night and the Lynns were worried. A baby goose on its own during the day is worrisome enough but at night there are more predators that would love to have a baby goose as a nighttime snack, they had to act. They knew the risk they were taking, the goose could imprint on them, but they had no choice. They felt if they left it outside alone it would die. The family took the baby to their back porch where it was protected from attackers and hoped that in the morning the parents would return.

The next day the parents did return, and the family tried to shoo the baby towards its mother and father. It didn’t work, the parents kept a safe distance away from the driveway and the baby showed no interest in going back to them. This happened again and again for a few days. It became clear that the baby had chosen a new family. It had imprinted on the Lynns and no longer wanted to go with the other geese.

The Lynn family were quickly won over, the goose was pretty cute after all. They started to look after the wonderful goose and even named it, Peeper. Peeper stayed with the family for two years, he lived on their back porch and became like a normal household pet. The family would pet him, the father would lift him into the air so he could go for a fly around the house before returning, he looked set to stay.

One day though, the father of the house threw Peeper into the air for his usual fly and expected him back moments later, but he didn’t return. The goose must have found some other geese to hang around with because the Lynn family did not see him again for twenty years. They did meet again though.

Twenty years later and Steven Lynn is no longer a boy he is a man. He stayed in his childhood home and is now raising a family of his own. On one faithful day, a goose landed in his driveway. This was a common occurrence so he didn’t for one moment think it could be Peeper. However, the goose stayed, it showed the same habits as Peeper and even responded to his name.

It appeared that Peeper had decided to spend his final years with his family and had returned to the Lynns to see out the rest of his life. He is still there to this day and has already become a favorite of Stephen Lynn’s children. The moral of the story is that sometimes even though we try to stay out of nature’s way, it can still get in ours. If that results in a lifelong friend then that is quite alright.

Why a pearl pops out from the oysters?