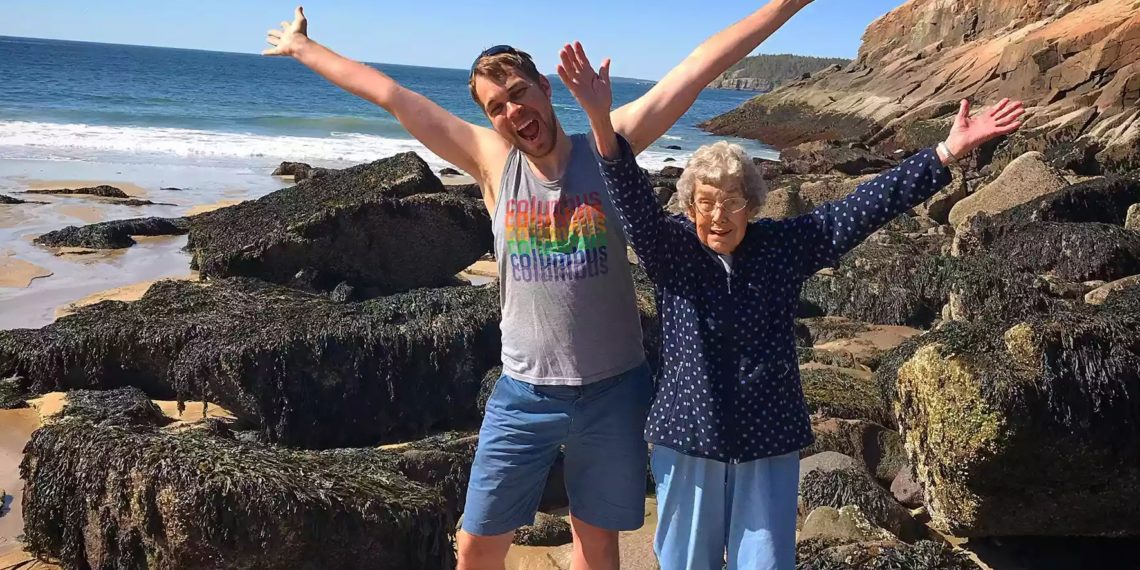 Are you planning a road-trip with your friends? But how about instead of friends you take your grandma along with on you on a trip? It’ll be fun, right! Well, a young man named Brad Ryan did this for his grandma Joy. When he separated from his grandmother ten years ago and thought to make up for all the loss by taking her up on a road trip to all the US national parks.

Since they have both been away from each other for a decade, Ryan tried to make up for that by sharing things about his life. He once told her about his experience of the Appalachian Trail thru-hike. It is when his grandmother spoke in a softened tone and said she regrets not getting a chance to see more things in life. That broke Ryan’s heart, and he later made a plan to go for an impromptu trip to the Great Smoky Mountains. Ryan was, in fact, happy as she climbed 2.3 miles on the trail.

For Ryan and his grandmother, it was a life-altering trip. They decided to make up for the lost time with this trip. Grandma Joy, for the road trip, showed the spirit that she still had at her age of 85. It’s never too old to pack for an adventure and travel.

The adventurous duo within four years traveled more than 25,000 miles across 38 states. The stories of their adventures are available on Instagram (@grandmajoysroadtrip).

Experiences of trip and parks

Having traveled so much, Ryan said that there had been times when they have faced difficulties. They once got trapped in a bison unheard for over four hours in the Lamar Valley of Yellowstone National Park. But it was an excellent experience to watch the sunrise over the Grand Canyon. With so many awe-inspiring destinations, it’s hard to pick up a favorite one for them. Still, their personal favorites are – Grand Teton National Park in Wyoming, Zion National Park in Utah, and Joshua Tree National Park in California. According to them, every US national park is a sacred space, and each contains something awe-inspiring or unique that you can’t experience somewhere else.

The duo planned a road trip at least once a year. In June 2019, they went to Acadia National Park in Maine, where they captured a picture of themselves on the Sand Beach, which brought global attention to their expedition. They hit the road in September to experience the remaining 20 parks in the US continent before they figure out how to get Grandma Joy to Hawaii, America Samoa, Alaska, and the US Virgin Islands.

Ryan and Grandma Joy enjoy their time being together. Ryan said in an interview – “You never know what’s going to come out of her mouth, and it’s usually hilarious. She is open-minded and full of heart.”

News that made Americans feel good

While the duo has been on their journey for the last four years, it was only recently when Acadia shared their photo on Instagram. It was the same day when America woke up to the news of the mass shooting in Dayton, Ohio. The picture quickly went viral, and the comments on their photo increased in no time. Grandma Joy’s road trip gives a sense of purpose in life, but it was hard to believe for Ryan that this also had the power to penetrate the masses towards the worst news to date.

The story of Ryan and Grandma Joy’s road trip is inspiring and gives us a message that it’s never too late for adventure or to live life. All you need to do is pack your bag and head on to your destination.