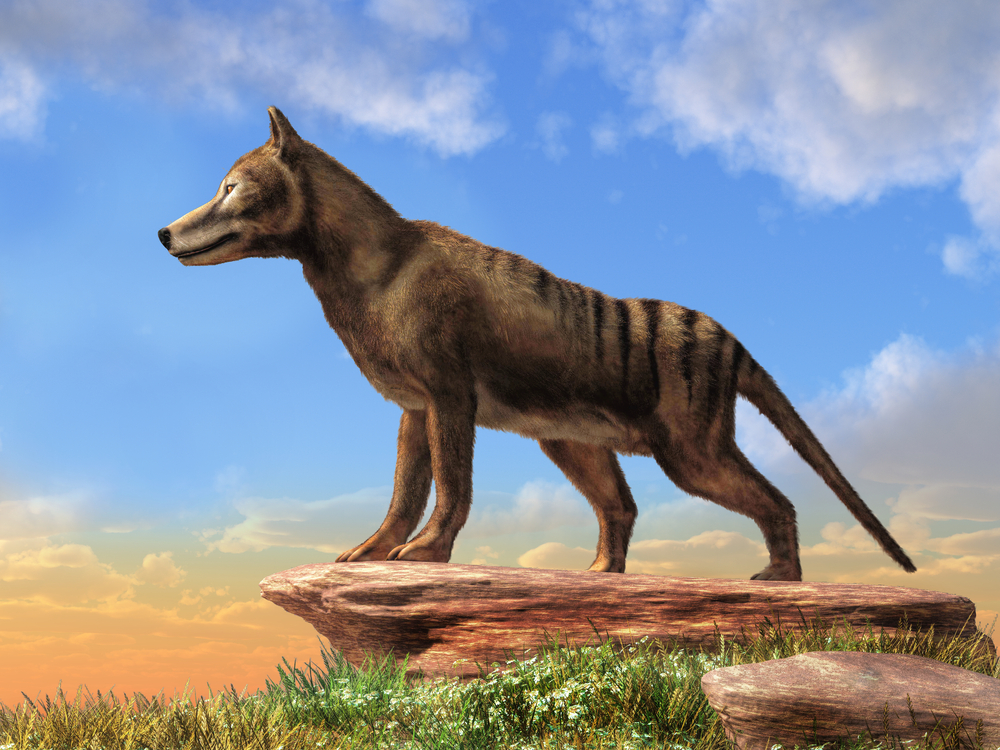 The Tasmanian Tiger is also known as a Thylacine. Thylacine is Greek for “dog-headed pouched one”. The animal bears the resemblance to a dog but has a pouch like a kangaroo to carry its young. It is known today as the Tasmanian Tiger because of the stripes on its back and its native home being Tasmania. The animal was also found in New Guinea and Australia but was most prevalent on the island of Tasmania when it had a healthy population.

The last known Tasmanian Tiger passed away in Hobart Zoo in Tasmania in 1936. The animal was accidentally locked out of its cage and couldn’t take shelter from the cold and passed away as a result. At the time this was not seen as the terrible event that it is looked at today. Tasmanian Tigers had a terrible reputation in the wild. Farmers hated them for killing their livestock and they had a reputation for being a bloodthirsty animal that was not safe. While they were basically wild savage dogs their reputation was largely exaggerated.

The last Thylacine was called Benjamin and there are a number of photos and one video of him during his time in the Zoo in Hobart. In 1966 Australia marked the day that Benjamin died as the National Threatened Species Day. A day that is in place to ensure we take care of those species that are in danger today and those that we have not managed to save.

One interesting fact about Thylacine that may give readers some hope is that the Tasmanian Tiger is the most sighted extinct animal. This oxymoron means that people often still report seeing the Tasmanian Tiger in the wild but none have been able to prove it. The most recent sighting came from scientists exploring a part of the land in Australia in 2017. This suggests that there may well be more Tasmanian Tigers in the wild and we just don’t know about them. Considering how they were looked after in the 1930s perhaps it is better if we don’t discover them.
There is a little more good news too. Recently a genetic strand of the Tasmanian Tiger was discovered and it has been placed inside a mouse. A Tasmanian Tiger that is 100 years old was discovered preserved in ethanol and the DNA was intact. This allowed scientists to extract the DNA and place it in a mouse. How they plan to get from a mouse to get the animal back from extinction is not clear to me but it is pretty exciting.

Consider for a moment the orangutan, snow leopards, mountain gorillas, Asian elephants, and the vaquita. These are animals that we know about in our world today (maybe you haven’t heard of a vaquita but check it out – they are cute) and that we take for granted. When we hear the word endangered we naturally assume someone is working to rectify the issue but sometimes the forces causing the extinction of an animal are too strong. The orangutan’s natural habitat is being destroyed and they will go extinct if we don’t do something about it. Don’t let these amazing animals become like the Tasmanian Tiger. Do your part to save the endangered animals and let your voice be heard.